PBA Finals News 2018: Alaska Aces overcame the Magnolia Hotshots, 100-71 to snatch Game 3 of the PBA Governors’ Cup Finals this Sunday at the Ynares Center. The Aces finally chalked up a victory to gain a 1-2 slate in their title showdown with the Hotshots. Import Mike Harris delivered the goods for Alaska with monstrous 36 markers and 18 boards, while Vic Manuel added 14 buckets.

➤ The Alaska Aces put the game away in the third canto, courtesy of Harris 22 total quarter points. The Milkmen also outscored the Hotshots in the third by a gargantuan 33-14 difference. Overall, Alaska’s efficiency was visible in the total field-goals, making 38 of 78 shots for a 48% percentage, compared to Magnolia’s 26 of 77 goals (33%).

➤ Hotshots go-to-guy Romeo Travis paced the losing Magnolia with his 18 points and 3 boards, while Mark Barroca added 13 points and 3 dimes as well.

➤ Alaska and Magnolia will lock horns once more for Game 4 of the PBA Finals this Wednesday, December 12 at the Smart Araneta Coliseum.

PBA Finals News 2018: Magnolia Hotshots scorched the Alaska Aces, 100-84 to take Game 1 of the 2018 PBA Governors’ Cup Finals at the Mall of Asia Arena this Wednesday. Romeo Travis powered the unstoppable Magnolia train with 29 markers, 13 caroms and 5 dimes, while Mark Barroca finished with 16 buckets and 6 steals.

➤ Paul Lee also made 14 points for the Hotshots while guard Jio Jalalon added a triple-double of 7 goals, 12 boards, and 9 assists.

➤ The Aces and the Hotshots will resume court hostilities for Game 2 this Friday, December 7 at the Smart Araneta Coliseum.

PBA Semifinals News 2018: Magnolia Hotshots booted out Barangay Ginebra, 112-108 to book a Finals ticket in the 2018 PBA Governors’ Cup this Friday at the Ynares Center. Import Romeo Travis bucked a hamstring injury to lead the Hotshots with 50 points and 13 boards, while Ian Sangalang made 14 points and 6 rebounds.

➤ With 10 ticks remaining in regulation, both Scottie Thompson and Joe Devance miffed their clutch trey attempts and failed to salvage Ginebra in crunch time. The Gin Kings were effectively eliminated from campaigning for a third straight title this season.

➤ Magnolia will get a long rest as they await the other finalist between the Meralco Bolts and the Alaska Aces, who will battle in Game 4 of their semifinals series on Saturday, November 17, at the Cuneta Astrodome. 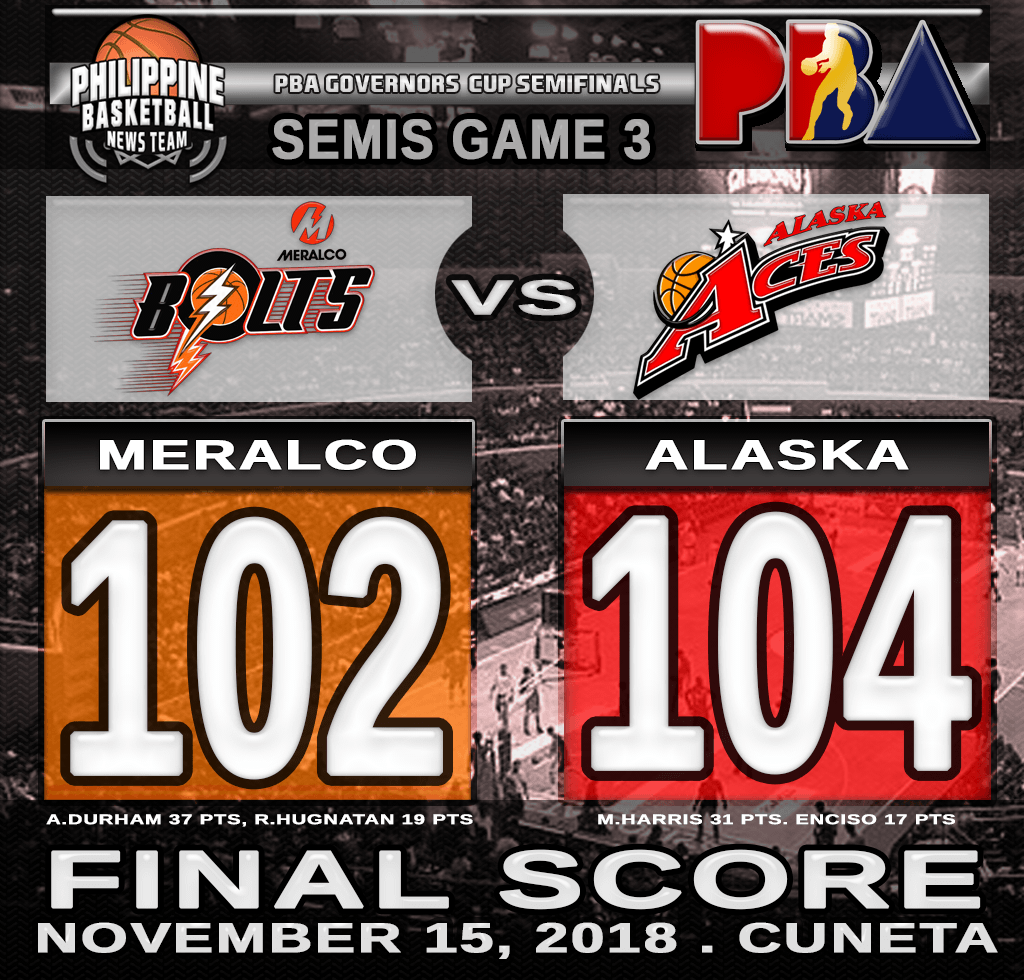 ➤ LA Tenorio finished with 14 points and 5 rebounds. He also shot the clutch floater off Paul Lee’s turnover, with 14 seconds left to lift the Gin Kings, 105-103.

➤ Ginebra bucked an 18 point Magnolia half-time lead and survived another day in their Semifinals series. Magnolia led the Gin Kings in most of the game stats, but Ginebra outpaced the Hotshots in charities, hitting 32 of 45 foul throws at 71 percent, compared to Magnolia’s 11 of 18 free-throw shots made at 61%. 11/18 (61%).

➤ Mark Barroca led the Hotshots with 19 points and 5 rebounds, while Lee made 17 points. Import Romeo Travis was the missing link for Magnolia, who managed to register only 12 points and 12 boards total.

➤ Magnolia is still leading the series at 2-1, and Barangay is in a must-win situation in their upcoming face-off this Friday, November 16 for Game 4 of their Semifinals showdown at the Ynares Center.

PBA Semifinals 2018: Alaska Aces froze the Meralco Bolts, 100-95 to level their Semifinals series to 1-1 in the 2018 PBA Governors’ Cup this Tuesday at the Mall of Asia Arena. Import Mike Harris posted monstrous numbers for the Aces with his double-double of 37 markers and 19 boards, while Simon Enciso uncorked 23 buckets with 15 coming from three-point bombs.

➤ The Aces effectively halted the Meralco onslaught as the defeat was only the first loss of the Bolts for the month.

➤ Alaska and Meralco will resume hostilities for Game 3 of their Best-of-Five series showdown this Thursday, November 14 at the Cuneta Astrodome.

PBA Semifinals News 2018: Magnolia Hotshots halted Barangay Ginebra, 101-97 to surge ahead to a 2-0 lead of their Semifinals showdown in the 2018 PBA Governors’ Cup this Monday at the Araneta Coliseum. Reinforcement Romeo Travis led the Hotshots anew with his 25 buckets, 12 caroms, and 7 dimes, while Ian Sangalang added 17 markers.

➤ Paul Lee also contributed 14 points as well as Rome dela Rosa who made 11 buckets for Magnolia.

➤ Magnolia had better command and defense of the court, making 26 assists total against 19 by Ginebra. They also stole the ball 10 times opposed to the Gin Kings 6 steals, resulting to 23 Ginebra turnovers total.

➤ Coach Tim Cone of Ginebra was ejected in the third quarter after incurring two technical fouls.

➤ Ginebra will need to win their next face-off with Magnolia on Wednesday, November 14 at the Araneta Coliseum to keep their hopes alive in the Best-of-Five Semis series. 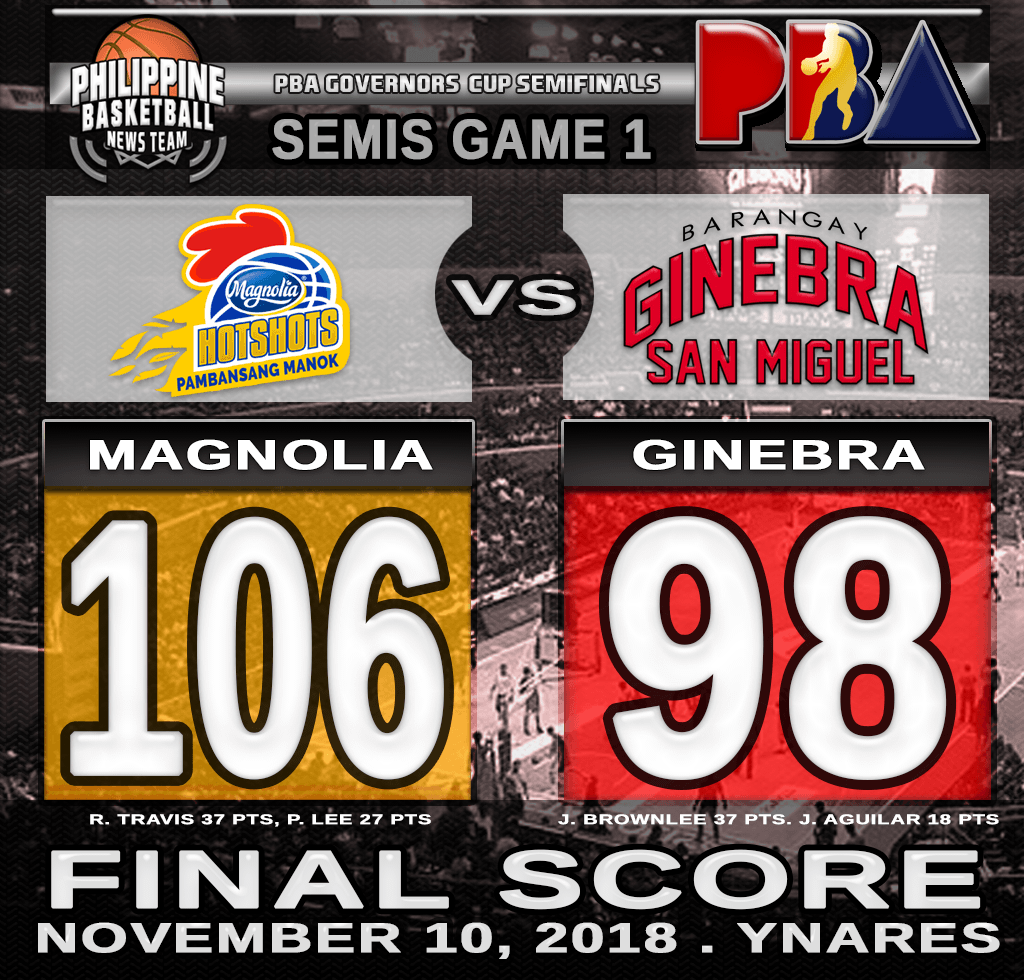 ➤ Magnolia manageably stayed ahead of Ginebra for most of the 2nd half, until the Gin Kings got to within two points, 93-91 with 1:57 seconds remaining. However, Lee showed his clutch arsenal as he dropped a trey and an ‘and-one’ in succession to push the Hotshots ahead 106-96, with 56 seconds left in the ballgame.

➤ Ginebra and Magnolia will resume hostilities on Monday, November 12 at Araneta Coliseum for Game 2 of their Semis matchup.